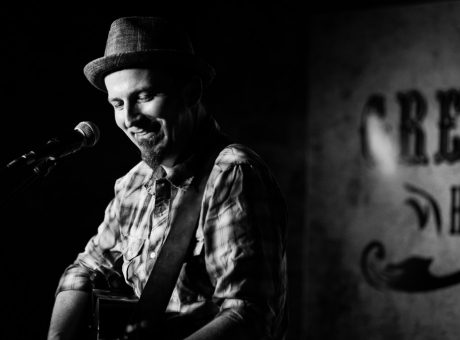 From street corners to subway stations to stages, singer-songwriter Peter Mulvey has honed his performance skills by embracing a relentless concert schedule since the 1980s. “I’ve spent 25 years relating to audiences. That’s what I do,” said Mulvey. “I’m mostly audience-centered.”

Jackson gets its chance to see and hear Mulvey Saturday, Nov. 8, at Weatherwax Hall, a.k.a. “The Wax,” the downtown music venue at 215 W. Michigan Ave. Mulvey’s show is part of the Affinity Series of non-classical concerts presented by Jackson Symphony Orchestra. Tickets are $15. Doors open at 7:30 p.m., and the music starts at 8 o’clock. Beer and wine will be available.

The concert will be a one-man show with Mulvey and his guitar. Categorizing Mulvey’s style is no easy task, and one effort that utterly fails can be found on Wikipedia. Mulvey is called an “American folk singer,” a description he says is “not even remotely” correct.

A native and resident of Milwaukee, Mulvey began performing in the streets when he was a 19-year-old visitor to Europe. “I started off singing on the streets in Dublin when I was just an exchange student,” he said. “For 25 years, all I’ve really wanted to do is play gigs.”

As a young man, Mulvey moved to Boston and performed in subway stations of the Massachusetts Bay Transportation Authority. “It was a good way to make rent,” Mulvey said. “On a good day, I could make $100.”

Subway performances led to regular gigs and morphed into a touring and recording career featuring something like 15 records. “I don’t even know how many,” Mulvey said. Mulvey has returned on tours to Ireland, where he started, and also to other countries in Europe. The Irish Times once said, “Peter Mulvey is consistently the most original and dynamic of the U.S. singer-songwriters to tour these shores.”

His most recent CD, “Silver Ladder,” was released this year by Signature Sounds. The album was recorded in Los Angeles with producer Chuck Prophet. “Silver Ladder” came after what Mulvey described as a “turbulent stretch” in his personal life. Official publicity for the record says it displays Mulvey’s “tendency toward ruminative and yearning acoustic songs with a dose of sharp-witted, punchy rock and roll.”

Onstage, Mulvey is known for story-telling between songs. “I tend to cover a lot of ground with two things: myself and my guitar,” he said.