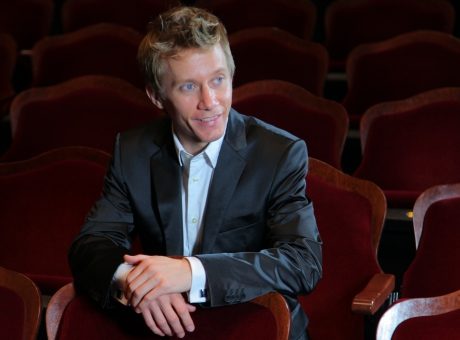 The guest conductor for Jackson Symphony Orchestra on Nov. 15 has racked up some impressive honors at age 32.

His name is Scott Seaton, and he won the 2011 INTERAKTION competition in Berlin. The following year, he was a semi-finalist in the Sir Georg Solti International Conducting Competition in Frankfort, Germany, which drew about 500 entrants from around the world.

What conducting skills or traits explain such accolades?

“I bring a lot of energy,” said Seaton, who is in his third season as music director for the Minot Symphony Orchestra of Minot, North Dakota.

“I have been compared several times to a young Leonard Bernstein, if that tells you anything.”

Seaton will conduct in Jackson a program entitled “Michigan and Finland, a Tale of Two Cold Places.” Selections will include Kairos by Michigan composer Evan Chambers and two pieces by Finnish musical giant Jean Sibelius, Finlandia and Symphony No. 2.

The concert starts at 7:30 p.m. at the Potter Center of Jackson College.

Seaton has never previously appeared in Jackson but has Michigan roots. As a boy, his family lived in several Michigan towns, mostly in the Detroit area, before moving to Nashville, Tenn.

“My music training started in Michigan,” said Seaton, who began by playing saxophone as a fifth-grader at Lapeer.

“I got into classical music because as a kid I was obsessed with a recording of The Nutcracker that I had. That planted the seed,” he said.

The seed was nurtured, he said, by an innovative band teacher in Nashville who included unusual classical selections in the repertoire of the marching band.

Seaton earned degrees from the Université de Montréal, the New England Conservatory, and the Blair School of Music at Vanderbilt University.

His international debut came in 2007 with the Orchestre Philharmonique du Luxembourg, and he has conducted or worked with dozens of orchestras in North America, South America, and Europe.

He came to Minot as music director of the symphony after previously holding posts with orchestras near Cleveland and at Kent State University.

Minot is located in the heart of the American oil boom, a city with a cost of living rivaling New York or Boston.

Seaton calls himself an enthusiastic advocate of contemporary music, and his Jackson program combines a 2010 work by Chambers, a professor of composition at the University of Michigan, with century-old masterpieces by Sibelius.

“Jean Sibelius has been my favorite composer for a while now,” said Seaton. “It really is great music, gorgeous.

“I’m excited to be coming to Jackson. I think it is going to be a great time.”